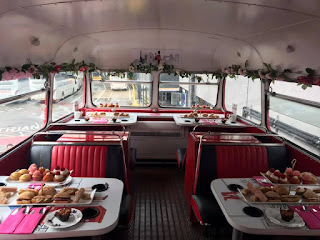 The tea is set up for you and is sort of stuck down on the table with a little bit of material! Note the nice touches of the flowers adorning the sides of the bus and the tables with natty bus and shopper images. You settle in and order your first (of many) drinks. I had in my head that I’d be supping loose tea using a strainer out of a bone china cup and saucer. However that just isn’t going to work on a bus, I realise. So you are given travel mugs with the same natty pictures on them as the table tops. Music blares, slightly loud, but I wasn’t underneath it, but it’s all fun music to sing along to. 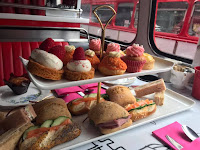 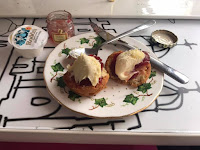 Savoury muffins start us off before we venture into the sandwiches (smoked salmon & cream cheese, ham & cheese, beef) in rolls and finger slices (properly cut with no crusts - you may laugh but I’ve seen crusts at afternoon tea!). It was only good manners that stopped me launching onto the top row of cakes. Four in total, my favourite was the - oh I can’t even say what it was! - a cake with delicious cream on top with a raspberry too. To our great surprise, but they even brought out warmed scones (tiny ones but big enough) with jam and cream. And before anyone asks, it was Rodda’s clotted cream - we are Cornish so it is important. (I won’t mention that my mum doesn’t like cream, but prefers butter and jam!)

Admittedly, when I first saw the display of food, without the warmed scones, I thought it would never be enough, but it was! Eyes are bigger than my belly, as my dad always told me. You are warned that they can’t stop the bus, so therefore you need to watch your liquid intake! I managed three cups of their perfect English Breakfast tea, which in my fussy opinion, was the perfect companion. 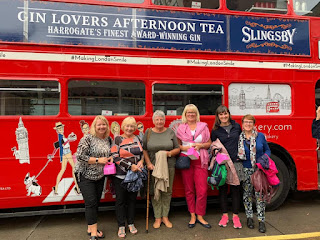 As well as the music, there was intermittent (recorded and live) commentary on sights around Central London, including Big Ben, Houses of Parliament, Hyde Park and Downing Street. We were not allowed past Buckingham Palace as, apparently, the Queen doesn’t like buses passing by. Even this vintage red double decker? A true British icon?

Being on the top of the bus, we had a great view. It was raining outside and that didn’t matter a jot, we still opened our windows. We were on board for nearly two hours (yes there was a little traffic but you don’t notice on board).

I really can’t fault this for money’s worth or quality. The waiting staff were very attentive, making the whole event feel very special. The best part was at the end of the tour when they announced we could keep our travel mugs (which I have to say are a good quality, no leaks and easy to drink out of). Now every time I use mine, I am reminded of those beef rolls, scones and raspberry cakes. Mmmmm. When are we going again? Oh they do a gin one do they? Book me up! 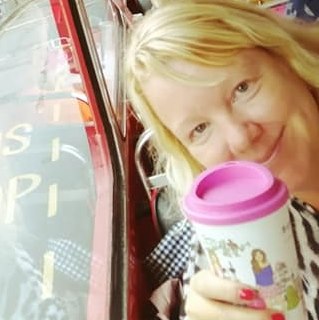 B Afternoon Tea Bus can be booked online at www.afternoontea.co.uk