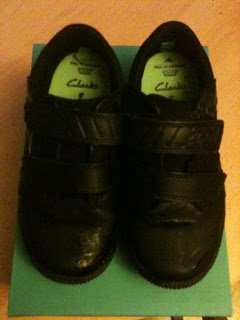 It is Sunday evening and for the first time in 5 years, I have the "I have to go to work tomorrow" feeling. And it's a full day 9-5, the rest of my working week is now Tuesday til Thursday 9-1 - proper part time! I skipped the Monday last week, first day at school and all that, so it will be a shock tomorrow.

Elf was a star, in fact the head teacher took me aside and said he was a credit to me. I do know her, and she knows Elf so it wasn't just a flip comment. I am very happy about this, children do the most unlikely things and just when you think they'll sail through something, they go and throw a wobbly.

I had a wobble on Thursday. Mr Humdrum was doing drop-off and pick-up Tuesday til Thursday and after diligently copying down the hours for the first week, I was sure he was 9-12 every day except Friday, his first full day with lunch. Mr Humdrum called me at 11.55 saying Are you sure that he's coming out at 12? I can't see any other parents here. I quickly phoned the school - they were staying for lunch that day. Oops, no packed lunch or money for a school lunch for Elf! What a bad mummy! They assured me he'd be getting a school lunch that day and he did - roast lamb. We paid that day. I knew I was going to forget something that week.

Friday was his first full day, and he wanted a packed lunch. I spoke to the head later. She said they'd given him water as he'd had no drink with him. I'd thought about putting a Fruit Shoot in but thought it would be contraband so figured he'd make do with the water bottle they have to take in each day. Oops! Mistake number 2!

Friday was also my first day as a volunteer. I'd signed up to help in Year 1 with Mr Gurney, who is our hairdresser's cousin's boyfriend! He's a young-ish extremely enthusiastic teacher and I was pleased to be put in with him. I arrived early during lunch and watched my Elf play with his NBF, who shares the same first name as him - I'll call him Elf 2, and their surnames start with the same initial. Very cute. He said when his teacher forgets to use their surnames in registration, they both say Good morning Miss Harris! And he laughs.

The topic of the lesson that afternoon was How can I copy an artist's work? In fact the interactive whiteboard showed ... artists work. I was tempted to go and tell Mr Gurney that he'd missed the apostrophe but thought that it could go either way for me, best not to risk it. Mr Humdrum pointed out later that it could have been my first test and I failed!

I was sat at a table where groups of 5-6 year olds would pass through and cut out facial parts and stick them onto a face, along with labels to show they could read the names of said facial parts. One girl was struggling to cut with scissors properly. I asked if she needed any help, she firmly said No. I had to almost sit on my hands to keep from helping her. I asked her again, No. Her group finished and the next group started. Still she beavered on. When she couldn't cut it properly, she tore it with her hands. The end result was a very messy face with bad cutting out but she'd done it all by herself! I was so proud of her for perservering and do you know what, it taught me a lesson too.

The afternoon went quickly, Elf wasn't too fussed when he saw me, just gave me a hug and walked off to his class area. I really enjoyed watching Mr Gurney take the class, I'm sure I'll blog in more detail about it. Mr Humdrum is fed up with me saying Mr Gurney did this, Mr Gurney did that already! Roll on next week.