Why didn't I read the letter properly? 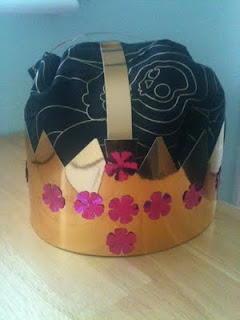 Dang and blast, as Boggit says. Or is it Bean? Elf starts talking about dressing up as a prince and wanting to make a crown. Then it dawns on me. I read the letter in the bookbag on the first day back about the Royal Wedding Menu (cheese or ham flatbread), but I didn't really read the rest of the letter. The first paragraph reads:

Children are invited to dress up as a prince or princess to celebrate the Royal Wedding.

Double dang and blast. Elf, Elf I love you, but we only have 14 hours to make a crown, I paraphrase from Queen's Flash Gordon. At least it involves no sewing.
Thirty minutes later, having raided the two art'n'craft trays, this is my creation. And I'm quite proud of it. The gold and black material inside has in fact got skulls on it, but who will see that? He thinks it's cool anyway.
I have got a picture of my Elf in a princess dress from last year. No I'm not THAT blogger from the US, and I'm not posting it here OK! Walking down the stairs in his pink dress with fairy wings, he has this little glint in his eye that says I know I'm a 4 year old boy but I might be a metrosexual yet.