Are you on the flames today dear? 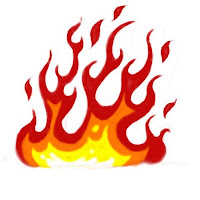 Since Elf went back to school this year, I've been asking him each day if he was on the flames. Your school probably does similar; Elf starts the day on the rocket, then can move up to the moon for possibly being the only one to tuck his chair in, then even further up to the star for good listening. He could however go down to the orange flames for not good listening, or even further down to the red flames for, as was the case in the first week, going onto Google on the lap tops, instead of Education City. (Mr Humdrum said Well at least he knows how to do it. Not the point.)

So after a chat with the lovely Mr G, his teacher, I decided to use bribery. Elf could have his 50p school shop money on Friday provided he wasn't on the flames. A day on the star could result in £1 pocket money.

Parents' evening last week proved that his behaviour was improving, it was only settling in and as he has moved from Reception into a Year 2 registration class, he was learning that unacceptable behaviour which might have got him told off in Year R might result in moving his name to the flames in Year 2. He's learning. Nothing to worry about.

Well that's school sorted. He's now decided to play up at home - every time we do something with his (and my) group of friends, he has a tantrum when we leave! Thursday, Friday and Saturday last week it happened. And even very slightly yesterday. Need to work on that, as it will threaten to spoil my social life too!

At least it's the right way round though, good at school and a sod at home!