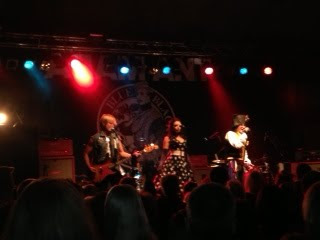 This is the third time I've seen Adam Ant. Perhaps that might explain why we were late to the gig - missing the first two songs! Or maybe it was trying to down my last gin (on an empty stomach) in the pub beforehand, and the trek across Southsea Common? We entered to Beat My Guest, having missed Press Darlings and Dog Eat Dog. I can still remember Dog eat Dog from the first time, so I didn't feel too bad.

The first gig was at the Wedgewood Rooms, a more intimate venue, 18 months ago, booked by us when his tour was first announced. With trepidation, we turned up along with the Southsea punk intelligentsia. There was a lot of love for Adam that night in the audience. Adam and the Ants were the first group I adored, as an impressionable 10 year old in 1981 playing Kings of the Wild Frontier over and over again, idolising this Prince Charming. I didn't care as much for later hits such as Puss 'n' Boots, I felt he'd lost his edge, but Stand and Deliver has to be my all time favourite song. The audience loved him that night. We couldn't wait to see him again! The second gig, at the Pyramids a year ago, he stood and delivered once more. We dragged along our gang and no one was disappointed.

So the third time, I was able to stand back a bit more objectively to hear the band anew. I wasn't in the "Oh my god that's Adam Ant there" frame of mind, even the second time I still felt like that. So maybe that has altered my view of the band. In the intervening months, I was able also to revise Dirk Wears White Sox and B Sides, so those older songs weren't just ones I slightly recalled.

The band seemed a lot tighter; at the first two gigs, the songs were a lot rockier than their originals - Stand and Deliver almost unrecognisable - but this time, even more rockier. Adam looks coolest to me when he's playing guitar. A friend was upset that there were no T-Rex covers this time; my response was is that because the band don't have to re-establish themselves as a rock band, rather than a pop band, this time around, having done that in the last tour? (Obviously a different band, and the rocky versions of the pop songs do work well.) Adam was a lot chattier this time, with comical stories of songs' origins (a 7 foot naked woman, Strip?; linking 50 Shades of Grey to Whip in My Valise; playing Antmusic with chopsticks every time he goes to a Chinese restaurant). He also said he remembered playing Kings of the Wild Frontier the first time at this venue.

When bands say "And here's our new single" you usually groan. Not this time. Cool Zombie is - well cool! I can't wait to buy it. Other favourites of the night: Cartrouble, Kings of the Wild Frontier, Whip in My Valise, Desperate but not Serious, Cleopatra, Antmusic, Physical. And of course Stand and Deliver.

Adam can sing - he holds his notes. He looks good not just for 56, but just good. The band are amazing, especially the girl drummer. When are they playing again? I'm in!