The Cureheads at Wedgewood Rooms, Southsea 24.6.17 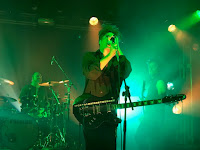 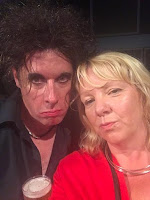 Having seen this Cure tribute band at the Butlins Shiiine On Weekend last year, I decided to give them another go in my home town. Admittedly, I'd not given them a good rating last time. Well, that's not entirely true. Musically, the music was great. In fact, more than great. But "Robert" was a bit odd - he rambled on about his grandad and Armistice Day. I think he thought we should be interested in him, rather than Robert Smith himself. With hindsight, after this second gig, I think the problem was that the first set was on near midnight and possibly he'd had too many lemonades? I decided that I was going to have too many lemonades this time, in order to truly enjoy the tribute experience, and it was my birthday celebration. I did know, however, that he was probably more "Robert Smith" than "Robert Smith" these days, in terms of voice, having heard a few YouTube videos of concerts. And his guitar - well, you can tell he learned these tunes from a young age. He knows them! He can play them! And yes he's awesome!

Listening to the support act, I bumped into "Robert" himself and had a photo taken - we pouted, as you can see. I actually was excited! The audience was sparser than I'd imagined, going by crowds The Smyths usually pull in. But I realised that they were nicer. More goth-like than lad-like. You could actually dance in the second row without having your drink spilled over you by Bigmouth-singing lager-louts. There was certainly a lot of love in the audience.

I always like to set up my reviews by specifying which period of the band's musical history I prefer. For The Cure, it's anything up to Kiss Me Kiss Me Kiss Me, released in 1987 when I was revising for my O-Levels. Anything after that is a bit "new" to me.

Stage atmosphere, they do it well. All dark and gothic-esque. I know it's EMO these days, but it's goth to me. Gary Clarke is certainly in character as Bob himself, all lippie, hair and mood. It just takes me back to The Head on the Door days, which I had on cassette in 1986.

I'm struggling to find a set list online, and I am having trouble remembering exactly what they did play! However, the first half of the set mostly consisted of songs I'd consider "newer", except perhaps Charlotte Sometimes, and A Night Like This. The second half of the set was more my stuff. In no particular order, mainly because I've forgotten, they played 10.15 Saturday Night, A Forest (my favourite), In Between Days, Lovecats (which apparently he said he doesn't like, nor do I that much - overplayed), Boys Don't Cry (I think), and Friday I'm in Love, at which point I went to the loo as I can't bear that song. I also have a memory of Let's Go To Bed and/or The Walk, but I can't confirm it was on the set list!

All in all, it was a fantastic evening - I'm definitely going to see them again, without as many lemonades, so I can remember all that they played!