May 04, 2018
In 2016, Mr Humdrum and I saw The Bluetones at Shiiine On, Butlins. Maybe it was the nostalgia of my uni days, singing with my bestie to Slight Return, maybe it was the hangover from the night before dancing to Echo and the Bunnymen and The Wonder Stuff, I don't know, but the Bluetones, supporting Shed Seven that year, were brilliant. Mark Morriss made some comment about the audience checking their babysitters were OK and that really resonated with us. 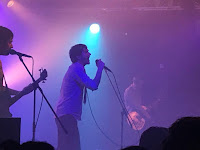 So last December, I booked tickets to see them locally. I decided to make this a surprise birthday present to Mr Humdrum, and two mates from Brighton were coming, but then it changed to a Christmas present from Mrs Humdrum Sr, then I forgot the mates were coming, doublebooked with a kettlebell exercise class and generally messed up with out a sitter organised! All came good and although arrived just after they'd started Bluetonic (grrr), we did get there!

The Wedgewood Rooms is a sticky old-school venue and it was full of fans when we got there. Of course, we were all of a certain age - but mostly men. Mark Morriss had lost none of his ability to work an audience. Even when his guitar strap broke, we laughed and it turned into a good segue between songs. He made comments about the great gigs they'd played back in the day at the same venue, which didn't show much for their career projection!

I have to admit that I only know a handful of Bluetones songs, but those songs do make up some of the soundtrack to my 20s. Slight Return - an anthem to our uni days, Bluetonic recalling those hazy days in the indie disco; Solomon Bites The Worm, although released when I was at uni, just reminds me of Teachers and makes me feel all kinds of happy recalling that fabulous TV series with Egg from This Life (yes, I know he's Rick Grimes too). If was their last track and a classic from that time.

I have to admit they sound better live, more rocky and more of a wall of sound, than on their albums. You can definitely notice a change in guitar style from the jangles of their early albums to the rockiness of later. The audience loved them, were very generous in their love for The Bluetones, and they were very appreciative back. It doesn't matter that there isn't a whole load of new tracks to listen to, it's just an evening looking back and revisiting those happy times.

And luckily for us, we get to see them again at our own Victorious Festival on August bank holiday! The Humdrums can't wait!