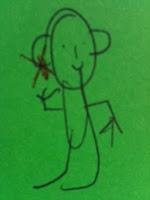 This is a get well soon card from one of Elf's cohorts. As you can see, there is a great big cross on his right ear, depicting the awful ear infection that Elf has suffered this past week. In fact he is still suffering. And so, dear reader, are we, his parents. From Competitive Tiredness. Well not that much actually, but it does remind me of all the times that we have.

This week, I spent three nights with Elf sweating and screaming in my bed, while Mr Humdrum snored in the spare room. After all, he did have to go to work. The hourly (yes) screaming is obviously Elf's way of dealing with the hideous pain that is otis media, but after 45 minutes of howling, you either wish you had glue ear yourself, or you think the neighbours will report for you for child abuse. Not even a cuddle could help, it was that bad.

Last night was my night off. Elf's superstrong antibiotics were taking effect halfway through the dose, at last. Elf has taken to calling them anti bionics, which is ironic because too many anti biotics, in my opinion, will make you unbionic.

In the pub at beer o'clock time (well we had to take Elf out at some point), our friends and I had a sweepstake on what time Mr Humdrum would knock on my door moaning "I can't cope". Would it be a 3am call to arms? Or a 10am cup of tea?

What did you expect? This would be the night that Elf started to get better, and only woke twice to scream, once at 3am for 45 minutes, and again at 5am for 15 minutes.  I got a cuppa at 9.30am, having slept like, a baby, an exhausted mum.

Cue my bitter snipes about Mr Humdrum being tired: Yes well, I did have THREE nights of it, you've only done ONE!

Competitive tiredness? Who said that I was being competitive? There's no competition, after all I won hands down.