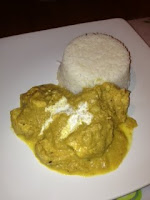 Mrs Humdrum is obsessed with Hairy cooking at the moment. We've had in the last week and a half: chicken korma, cassoulet, spag bol and today lamb tagine is in the oven for tonight, with rice pud to follow. I bought the Hairy Dieters' cook book during half term after I saw a couple of the recipes at a friend's house. It was reduced and I think I paid about a fiver for it. I was tempted not for the diet reasons, but it had what I call "proper" meals in it - casseroles, pies etc; food I would want to cook regardless of being "healthy".

Admittedly I haven't been following the dieting part of the book (have you seen how much pasta 50g actually is?) but I have justified this by feeling inspired again about cooking, and have been enjoying cooking from scratch with healthier ingredients. Maybe I'll start the diet thing later...

The only downside is that the recipes are quite time-consuming (two hours approx each), but then you would expect that if you wanted "proper" food wouldn't you? I made the cassoulet with half the meat, and froze the remainder of the sauce. Next week I only have to cook some sausages and add the defrosted sauce. Next time I will make double and freeze the korma sauce, and may try it with vegetables. The spag bol I might bulk out with a few more beans and vegetables.

But my verdict so far - fabulous! I will update with a review of the lamb tagine and rice pud later.