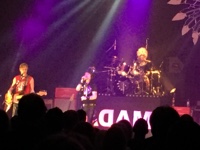 Having heard about the Dirk Wears White Sox tour, we knew we had to buy tickets for the Kings of the Wild Frontier tour. Thirty five years since its release, it has remained a firm favourite in our house. We were 11. It was the first "proper" album that I got into. Glynn's parents wouldn't let him have a copy, instead buying him a Shakin' Stevens album - which he now can't jibe them about as they bought him an expensive watch to shut him up. I had a copy taped for me by one of my parents' friends.

I put the album on the other week, to "practise". I didn't need to. I know every word, every yelp and howl, every key change, every pause, everything. It's been with me for 35 years, I know it like I know my name. This will have been the fourth time we have seen the great man since his return, so we knew what to expect. This time it would be different though because it was an album tour. I agonised - Would he play it in its correct album order? Would he change any bits? Would he skip the high notes (a sad thing in my mind as we continue to see older singers who've lost their youthful range)?

As a venue, the Guild Hall is accoustically amazing. The sound was far better than in the Wedgewood Rooms or the Pyramids, not unsurprisingly. But we had an issue from the off - it was seated! What? Yes. We weren't allowed to stand at the side "during the main act", an orange polo-shirted security man told us. This was just after the support act, and they were playing Sex Pistols and X Ray Specs for god's sake. I talked to a couple of old punks stood at the side. We were going to start a revolution, rip up the seats and dance, man! Ant Music is our banner! As he started, like good punks, we dutifully went to our seats. Long live the revolution.

Off it went. Dog Eat Dog. Ant Music. Feed Me to the Lions. Los Rancheros. Ants Invasion. Killer in the Home. Kings of the Wild Frontier. The Magnificent Five. Don't Be Square. Jolly Roger. Making History. The Human Beings.

Dog Eat Dog, Ant Music and KOTWF we were used to. (My first moan was that the drum into to KOTWF was with the guitar riff start instead of on its own. Just a little moan!) (And my seond moan, I wanted him to join Ants Invasion and Killer in the Home - but he paused. OK I'm sure he needed a rest and a drink!) The Magnificent Five was my favourite live track. Every whoop and yelp was there. Glynn and I automatically sing different parts (me Prick up your ears, he Five Mag Nificent). He who writes in blood, don't want to be read. The disco-ey Don't Be Square fantastic. It was amazing hearing Jolly Roger live. Making History too. The Human Beings was my second favourite live. Blackfoot, Pawnee, Cheyenne, Crow, Apache, Arapaho. Goklayeh Ho.

He was quiet betwee the album tracks, he just put it out there for us. Brilliant. No high notes dodged. No yelps or whoops missed. He sang it all.

I'd have been happy at that, but of course he followed it with a set of the remaining classics. Stand And Deliver is my all-time favourite song and is always amazing live. Car Trouble was a highlight. Prince Charming, back to his rocky roots for this version. Goody Two Shoes, but no Puss in Boots. Oh well, Beat Me made up for that. An encore of T Rex's Get It On, Physical and Red Scab (I think!). We waited just in case there was a second encore (which he did to a small audience the other week) but sadly, that was it.

Can I just mention that standing in your seat area was a bit odd but when the two boring girls in front of me left, I had a fab view! My ears aren't quite so bad today from not being at the front and I wasn't mosh-handled at all. Very civilized. I don't want that for every gig, but it did allow me to concentrate on the album - it wasn't supposed to be fun you know, it's a very serious event, hearing and singing and dancing to your first favourite album ever!

Adam Ant just gets better every time I see him. He was not so chatty this time, but his band are tighter than ever. His own guitar playing was awesome. The two drummers I could watch all night. What a sound. What an album. What a performer. What a man. Adam completes his slow strip all show, bearing his own band black t shirt at the end. Commanding that stage like he was born for it, he's stlll got it.