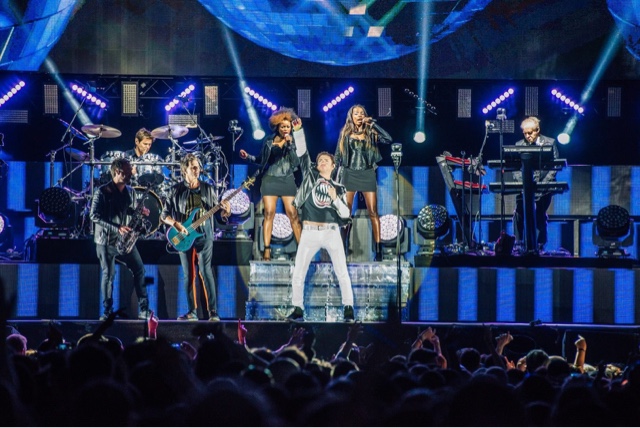 Six months ago, my Durannie friend asks if I want to go to this festival in Southampton to see Duran Duran. It's just before my birthday, what a great idea. And let's upgrade to VIP tickets! Together, we've seen them three times. The first - no John sadly, but still good. The second - in Birmingham, fantastic to see JT at last (he's always been my fav, my friend preferring SLB). The third - extremely special in St Andrews football ground. We were so close and I was pregnant with Ben, dreaming JT was the father!

Fast forward to this gig. We are so excited. Recovering from tonsillitis, I didn't even know last week if I was going to be able to make it. We must've looked a type in the VIP Nook. I don't know, 40-45 year old mums on a day out? Must be here to see DD. We met some lovely ladies with whom we shared the event, and a group of Southampton couples, with whom we bantered about Pompey -v- The Scummers etc. Yes we'd had a few drinks.

In the VIP Nook area, the toilet blocks are separated by hessian screens. My friend returned from a trip there and said "I'm sure you can see where they'll go on stage from." With that, we ran out before they came on. We peered through the small squares in the hessian screen. Lo and behold, there they were! I took a few pictures of them getting ready, listening to the crowd going wild for them. I was almost spellbound, definitely starstruck. I've seen you on the stage and I've seen you on TV (see what I did there?) but there was something mesmerising about watching them prepare. Psych up. Whatever. The crowd were crazy and this next bit was worth the extra payment for the VIP area - I saw JT shake his hands together in the air and genuinely look excited at the anticipating audience! It was amazing that he (they) still get turned on by this. That it's not just '"oh some municipal festival or whatever". This is a DD gig with massive fans and casual fans alike, all cheering their hearts out to see you. I shouted to the sax player "See you in a minute!" He said, "I can't see you!" and I shouted, "Yes, you can, look here's my foot" and stuck my foot under the screen. He laughed! They climbed the stairs, we ran back to our bench.

Now I must just take the time to explain what sort of fan I am. I am not, unlike the two lovely ladies we met, an uberfan. They've seen them so many times. Met them at book signings and on the Eurostar, being asked for headache tablets! They know where JT's mansion is. I don't know even know all the words to Notorious, but I think I can fudge it. I certaintly don't know Sunrise off by heart and I haven't (the shame) listened to Paper Gods, their new album. I am a huge fan, but only really of the first three albums. Duran Duran, spawning the singles Planet Earth and Girls on Film, is the best. I know every song, every lyric, every drum beat, every synthesized Nick note... Rio is just perfection. I know this like I know the first album too. It doesn't sound dated even today. Seven and the Ragged Tiger, well I can't say this is a "great" album and it does sound a bit dated, but I loved it at the time and so it remains on the list. Notorious was out in 1986, but by this time, I had gone all Smiths and Cocteau Twins. I do like the funkiness of Notorious and Skin Trade, but I don't even think I bought it. I think I just preferred the New Romantic stage. Oh and the Look At Our Ostentatious Video phase.

So, the setlist. Well first off, Simon seems to have had the same illness as me! His voice was croaky and he could be seen coughing off-mike quite a lot. Fair play to him, I'd have expected him to rely on his backing singers more, but he didn't. He sounded better than I'd heard him before, in spite of his croakiness. No duff notes there Simon! Paper Gods to start off. Wild Boys - always a crowd pleaser. Hungy Like the Wolf - ditto. View to a Kill - loved the Bond theme before. Later when introducing the band, SLB said of himself "The name's Bon. Simon Le Bon." Come Undone - I like it but not as much as my friend, it's her favourite. Last Night in the City - a new one for me, quite good! Notorious - funky as flip. Pressure Off - a newbie but I do sort of know it. Planet Earth/Space Oddity - I'd forgotten they were doing this. It worked well and the crowd appreciated the nod to one of DD's heroes, Bowie. Ordinary World - a crowd favourite, but not really one of mine. I Don't Want Your Love - OK. White Lines - they get a lot of stick for this cover version but do you know what? We all love singing it so why can't they have some fun? Sunrise/New Moon on Monday - obviously I was mostly impressed with the New Moon on Monday bit! Girls on Film - awesome. Their encore - I missed what SLB said as I'd fallen off the bench and launched into the man in front at that point, but it was something like "Without Prince, (our?) music wouldn't sound like it does". We held our lighters, I mean phone torches, aloft in memory during Save a Prayer. Rio - the last one. Such energy!

As we were on this hammock/bench thing, we had a great view of the whole festival field. Everyone's hands were in the air during the 90 minute set. They were awesome to look at (not just the band but the whole set up), the backing singers weren't annoying like sometimes they can be. They looked part of it. Simon worked the audience. There were youngsters behind us singing every word. Older people singing along. Older couples slow dancing to the hits. I kept catching the eye of a woman dancing near us, and at certain points, it was like we were talking in shorthand about a shared history we'd never had. Who would've thought DD were a festival band? They were last night. Of course I'd have liked more old hits, but the whole show was slick, energetic and current. No 80s throwbacks here. The whole atmosphere was enhanced by sharing the experience with our new Durannie friends; we just sang along and screamed like teenagers. I took a blurred photo of us in mid scream. That summed it up. What a fantastic night.

Just as we'd seen them enter the stage, we ran back to our peep-hole to see them exit. We filmed with our phones over the top of the screen this time and watched them descend the steps, to be chaperoned in to their waiting cars. First Roger, then Nick (I always love his lipgloss), the guitarist and sax (sorry I don't know their names - Dom?), John and then Simon. I shouted to Simon, "Hope your voice gets better." And this next bit made my night. As he was putting his jacket on, he gave me the peace sign. Swoon. Do you know, I think I may trade my allegiance ... JT gave me nothing but SLB gave me a V! I am 10 again.