A Humdrum holiday in Wales 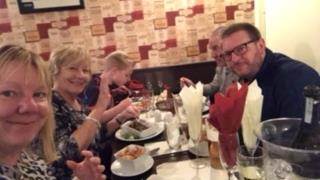 During the half-term holiday, we celebrated Mrs Humdrum Senior's 70th birthday by renting a cottage in the Middle of Nowhere, South Wales for the week. Holidaying with my parents and us three, I imagined finding a happy medium of activities for us all would be tricky. We like sightseeing, we like walks. He likes - well, YouTube.

After overriding Mr Humdrum (oops not good parenting but I had to do it), we allowed Ben to use his phone on the wifi in the car to watch The Simpsons or YouTube. Our journeys ranged from 30-90 minutes each way each day, and I reckoned that this was a good trade-off for his attention during daytime and at mealtimes. To be honest, I was asleep on the way home most evenings! It seemed to work; he disappeared upstairs after the hot tub each night, but came down again to play a game or to watch a film. He put up with our walks; even when the sightseeing wasn't quite to his taste, he didn't moan. I think the little angel is starting to understand compromise... 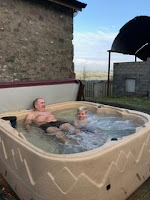 I knew the hot tub would go down well - I didn't realise just how much! I thought a hot tub was meant to be a relaxing place? Not when he started fighting with his grandad! They just couldn't stay still! For me, it was the best thing of the holiday. Being able to get up and go straight in for a dip before breakfast, and first thing when we arrived home after a heavy day enjoying ourselves, was bliss. Come rain or wind, we were in there. Both female Humdrums did have to wear shower caps to keep our hair dry - mostly from the rain! 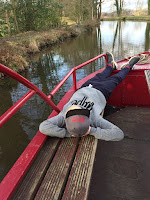 And if the hot tub wasn't relaxing enough, the boat trip was. Redline Boats at Goytre Wharf wasn't cheap, but it was well worth it. We hired a day boat and travelled south towards Mamhilad. Although there were no locks to encounter, we did have a splendid lunch at The Star Inn. Opposite the pub was a church dating back to the Middle Ages with ancient yew trees in the courtyard and the oldest (I think) font inside on record. Ben managed to crash the boat each time he drove it; I did quite well, but had to totally concentrate on it. Sadly, we weren't able to hire the boat we'd booked so we didn't have a canteen on board, but flasks of tea kept us going. The rain held off too! 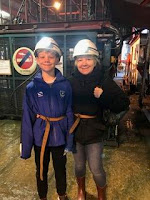 Writing about coal for 12 years, you'd think I'd have been down a mine. Well no, I hadn't. Until now! Big Pit was a great day out, recommended by the owners of our cottage. It is still technically a working mine, and so we had to wear all the right safety equipment and no batteries were allowed underground. The tour is about 45 minutes and you walk about 700m 90m underground. What's amazing is that it is almost "current" history - it's living history for us adults. Although I may not have understood the miners' strikes in the 80s, I can certainly remember it on the TV. Here is was all made real. Maybe it's a bit odd, but I like looking at all the safety issues - particularly how things have improved over the last 100 or so years. How children aged 6 used to watch doors there, sometimes in darkness if their candles went out (and gosh, was it dark when we all put out our headlamps!). How the horses lived and were better treated than the men. How the wives and families campaigned for better conditions. When we soaked ourselves in the hot tub that evening, we recalled how it was only after 1939 that there were baths on site so the miners didn't come home filthy. And it was free! A highly recommended, fantastic day out. Ben loved it too; even Mrs Humdrum Sr who doesn't like anything like this usually (cramped spaces, lifts underground etc). 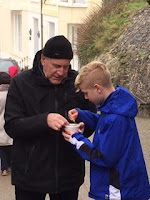 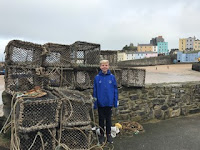 Daytrips to The Mumbles, Tenby and Swansea made up the rest of the week. On the way home, we called into St Fagans near Cardiff. This is a sort of living open-air housing museum, whereby buildings from all over Wales were donated to preserve the old Welsh way of life. From farmhouses to woollen mills, chapels to a tannery and a toll house, the grounds also include a sort of village green with a tea-house on site. The shops were amazing - I could hear "I remember these" when looking at the old preserved packets. Apart from an amazing pre-fab house, the highlight was a terrace of six houses, the Ryd-y-Car ironworkers' houses, whereby the décor ranged from 1805 up to 1985, the last of which seemed quite familiar to Mr Humdrum and I as being like our grandparents' homes! They must've looked so dated to Ben. Unfortunately this was the only thing we did that week that Ben didn't find interesting! 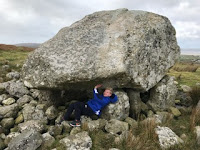 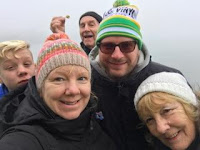 During Gale Force 7 winds, we trekked out to the Worm's Head, after walking to King Arthur's Stone. The scenery in both locations was stunning and the weather kept dry for almost the whole time. The stone is thought to be a Neolithic burial tomb dating back to 2500 BC. I love touching old stones like that, imagining who has also placed their hands in the same place. The Worm's Head is an amazing headland joined to the mainland by a rocky causeway, and only accessible safely when the tide is right. The Bay Bistro, whilst not cheap, served us with delicious toasties and cake, with "breathtaking" views of the bay (their words, but it was breathtaking in that wind!). 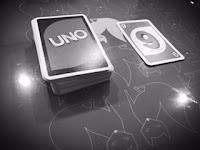 The evenings were taken up by either eating or planning our next day in the hot tub; there wasn't much time for anything else, except a quick game of something before bed. Uno usually did the trick.

I feel we turned a corner with Ben's attitude and maturity that week. Maybe he realised the holiday was in honour of Nana's birthday and was accordingly well behaved. Maybe he just realised that if he did what we wanted, we would let him do what he wanted. He did admit that if he played up, he knew he'd be "restricted doing things" (yes he actually said that). I'm sure I'm speaking too soon on this... watch this space. 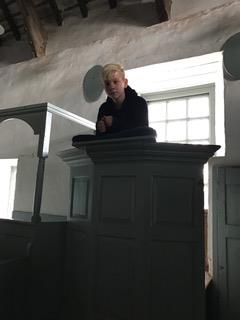