March 29, 2019
I have to start every review by saying what sort of fan I am of the band's music. Well, I'm not actually. This is not my kind of music really, but I've gone with Mr Humdrum. I missed Dub Pistols when they played Victorious in August 2018 - after a heatwave, they played in the worst rain we'd ever seen in this city. It was not due to the rain that I missed them; rather I was escorting my moaning son home in a taxi before returning to catch The Bluetones. 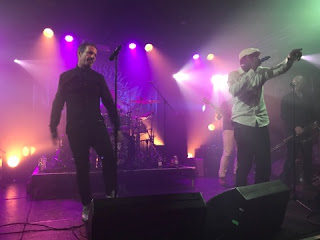 The energy on stage is apparent from the start. You know how most bands, and audiences come to that, reserve most of their effort for playing/singing/dancing to their last track or two? This was full on from the word go. I was mostly impressed with watching the band play live. I honestly never thought that this sort of music (rap/dub/ska/ragga/jungle?) was played live. Did I think it was just sampled or did I never think about it? Who knows. But watching their drummer, guitarists and horn player was awesome (I do love a horn). The baseline was almost free jazz, I thought. Supported by the Ragga Twins, they also joined them on stage for many songs which only increased our enjoyment. You can tell a lot about a band via their audience and these were lovers, really. I tried to take a photo and was escorted into front central position. You don't get such nice people at a Smiths tribute act, I can tell you.

Not being a "proper fan", I could't reel off the setlist for you, but there were nods to previous guest bandmember Terry Hall, and to Ranking Roger. In all, their set was urgent, loud and loving at times and I made up my 100000 steps that day as I just couldn't keep still. Afterwards, we managed to take a selfie with Bazza, who was, shall we say, still going for it! I would've loved to have caught them at Victorious but at least this gig was a little dryer.