Out walking with Ms Humdrum - Emsworth to Langstone 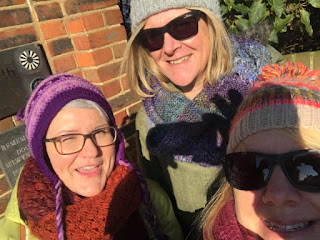 I suppose it started with a group walk in Hambledon late last year. A friend organised a walk for four of us, we walked it, she said she'd organise a monthly one, I missed the last, bought some new walking "trainer/boots" but I was hooked. For exercise, I try to run. When I say try, I mean that I both try to fit in runs during the week and I also actually try to run. I shuffle. But I can run, I can run/walk a 5K. But if there's an excuse not to, I will find it. In February half-term, I caught a cold and as is normal with me, I always suffer with my sinuses. It seemed that walking was the only thing that kept the cold at bay! (Well that and the hot tub from my earlier holiday in half-term!) I lived in those walking shoes, and I have just about since. Maybe this is the new exercise for me? Who knows. 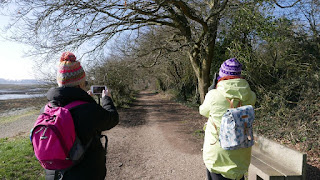 Last week, on our second big walk, there were three of us. Arrangements made by A well in advance were forgotten and she changed them last minute! It was a beautiful crisp day, such a contrast to this week, deep in snow. We set off from Emsworth en route to Langstone. I'd walked this route many years ago when practising for the Moonwalk, but had used it mainly as a walk, not to investigate what was en route, nor did I ruminate or reveal, which we did this time. It's probably due to the fact that I was around 30 then and had no need for ruminations or revelations. Fast forward nearly 17 years, and there's always something to talk about. Talk we did, but what is discussed on a walk stays on a walk. Them's the rules. 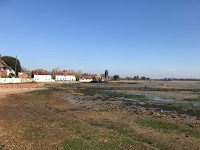 Emsworth is a pretty little town on the south coast, near the border of Hampshire/West Sussex, famous until the early 20th century for its oyster industry. Promenading around the harbour leads you directly to the shoreline along to Langstone, the gateway to Hayling Island. 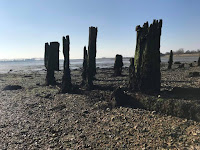 Supposed to be following a map, we stayed on the beach, photographing the views and interesting hedges. After a quick coffee stop at The Ship Inn, we retraced the original route along country lanes, passing through a 9th century church and its graveyard. Touching the original wooden (small) door, I wondered who had touched the same spot, and how many had done so. This graveyard is known for intricate graves decorated with carvings of ships and skulls, as noted in our guide book. 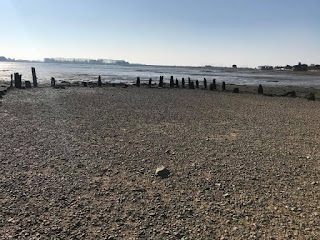 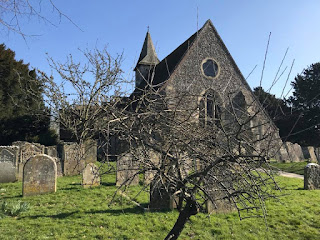 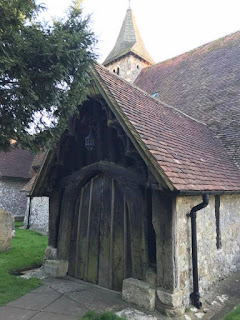 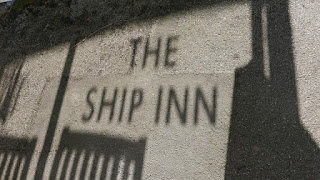 Lunch was well deserved back in Emsworth after a 4 and a half mile walk in total, at The Coal Exchange, a quaint, tiny pub with proper pub lunches (I had a Coalie Club sandwich with chips).

I can't say what was best about this walk - the company, the scenery, the weather or the discussions on the way!