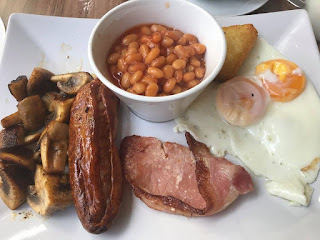 My friends will know that I am a breakfast aficionada. When Master Humdrum was smaller, we would be free for three whole hours on a Saturday morning (extra long football training) which afforded us time to languish over a full English. I don't know which I enjoyed more - the thrill of ordering what might be the best ever breakfast in a new venue, or returning to our old haunts as we knew we would get the best. Over time, things change. Football training morphed into a second weekend team so we couldn't really dump him at a game on Saturday morning, just to enjoy a breakfast.


Until last Saturday, when the fortune brekkie allowed us two hours off.

Mr Humdrum found Cafe Marmalade, situated on Copnor Road, online. We had been there before, but a few years ago and I believe it was refurbished and reopened earlier this year.


The service was very good, despite waiting a little longer than normal as someone had called in sick - it was worth the wait. The toilets were extremely clean. The chef was very friendly when we asked her about the meat.

Cost - I have to say, I can't remember how much we paid for it but it was very reasonable!

Anything to improve on? I feel like I have to find something. If there was butter and not spread in the little pots with the toast, it would be absolutely perfect! We will try to come again, football training sessions permitting!