October 31, 2018
Tucked in the redeveloped arches in Old Portsmouth is the Canteen. I can't believe I hadn't been here before! Half-term means a breakfast meet-up with friends and I was pleased it was going to be here.

A good two mile walk from Canoe Lake afforded me free parking plus a chance to clear my foggy head. We chose a large table in the middle as there were a few of us, but my mind was set on returning to the little table by the window next time. Apparently there is a small terrace to sit on, where the water laps in at high tide. That's the next but one time sorted then.

So obviously I'm going to choose the breakfast. A few of my friends go for the veggie option, but meat is the way for me. I was able to switch the evil tomato to avocado, which was offered with the veggie breakfast stack. Result number one.

The stack arrived - it was a thing of beauty. A rosti at the bottom, crispy streaky bacon (not fatty) which I thought may be from my local butcher (see later for details), delicious avocado (more of a guacamole than slices, but very tasty), truffled mushrooms scattered around, a split sausage or two with a soft poached egg atop (result number two). (I specify soft poached because we've all suffered the horror of ordering a poached egg only to receive a HARD boiled egg. How hard is it to serve a soft poached egg, I mean really?) What more could you ask for? Oh a sprinkling of greenery to make up for not having ordered the veggie option! No bread or toast, but do you know what? It made me feel healthier! The stack was hot and extremely tasty. And I didn't feel stuffed (probably due to lack of bread) - result number three. I'm not the only one who judges a breakfast by its sausage. This one did not disappoint. The manager kindly confirmed my suspicions later that my own favourites, Bransbury Park Butchers, are their source - I told you I recognised their bacon! I sometimes think I should just follow their delivery van around and frequent those establishments.

This tasty start to the day was washed down with two cups of Teapigs' Everyday Brew.  We certainly outstayed a normal welcome, but there was no pressure to move.

This waterfront restaurant is stunning inside, with extremely clean facilities, and I will certainly be returning. My stack set me back £9, which was deemed "pricey" by a friend, but to me, it was well worth it. The tea was a bit pricey at £2.50 a pop; this, I feel, could be balanced by a pot of hot water for a refill. (A good cuppa is hard to come by though, actually. I do remember their sister venue, The Tenth Hole, being unable to keep a cup of tea hot when half of their seating was outside! Not good when you've bundled your crying 9-month old into their buggy, walked two miles along the sea front, only to be faced with a cold cuppa. The fact that my son used to wake up as soon as I lifted the cup to my mouth for the first time is another matter!) However, the dear tea isn't a deal breaker. When's the next meet-up ladies?

[This post was not sponsored; however I'd love to try all eateries in Portsmouth and Southsea for a free lunch. Or breakfast!] 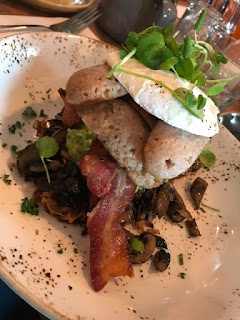