When your pre-teen son is taller than you

October 31, 2018
I should've known right from the start that he'd be huge. Created by a short- (me) and average-sized (his dad) parents, luckily the boy turns after my dad and not me. During his last three month stay in the womb-hotel, he outgrew his accommodation, forcing a referral to a specialist for his talapese. Thankfully, the specialist confirmed that it was indeed a "packaging problem rather than a manufacturing problem" in that my small stature bunched his feet up, causing him to kick me incessantly in the ribs as well as slightly deforming his feet on entry to the world. However all is well now in that department. But here are some of the issues with having a pre-teen son taller than you:

1. Sorting socks - "Are these yours or dads?" I ask multiple times. I'm sure we bought different socks for you and your dad so we'd work this out, but for the life of me I can't remember. You can do it yourself.

2. Sitting at the table is becoming impossible. No matter where he sits, or where I sit, his feet are where mine want to be.

3. Everyone comments on how big he is. And how big his feet are. It's the adolescent version of peering into the pram and saying, "Look at his little cheeks!"

4. Sport becomes more problematic - just growth in general. Tackles in football become dirtier. ON him, I mean, not FROM him. Never that. Ahem.

5. The relationship changes; hugs where he looks down now bring me closer to the time when he'll be helping me along on my zimmer frame to get my blue rinse done in my assisted living house.

6. It makes me realise just how flipping short I really am. You do realise, don't you, that these new trainers they all wear have LIFTS in them? Have a look at those heels!

7. Actually I think it's OK to be a mum with a taller son, but how about when he overtakes his dad? Will he finally become the alpha male? Time will tell... 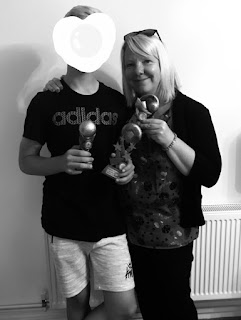