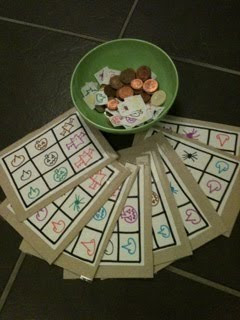 Most of you have already done your Hallowe'en blogs but I'm a bit late. Having just moved, we decided to host a Hallowe'en party on Sunday for Elf's old nursery friends, we call them the Puddlers, as his nursery was called Puddleducks.

I didn't quite know what a 7x4-5 year old Puddlers' Hallowe'en party would be like, and I organised the following games:

- Hallowe'en bingo - pictured - by far the best game of the party (Elf said so!). I spent an hour making the bingo cards and symbols to call out. I was going to get the kids to use a crayon to mark off the symbols but then I thought if I used pennies, we could re-use the game. (We are having a Hallowe'en party every year now after all the decorations we made!)
- Musical statues with a scary face - do what it says on the tin!
- Corners using frog/bat/pumpkin/cat card images from an Asda decoration set
- Dress up like a mummy - involving wrapping toilet roll around a mum to make them a mummy. No one wanted to do it at the start, then when they saw how silly the mums looked, they ALL wanted to do it and now we have no toilet roll left!

We had loads of decorations and scary fairy cakes 'n' biscuits, and I cooked a sausage'n'bean casserole for the adults. It started at 4pm and the guests were gone by 8pm. A really really good party.

The next day I was forced to make a new bingo set, so that we can play bingo every day! It's a rocket/alien/planet themed set, made with card, felt pens, paper, sellotape and motherly love! I can take orders, about a fiver for each set and don't expect Picasso standard drawings!