A Christmas dash to A & E 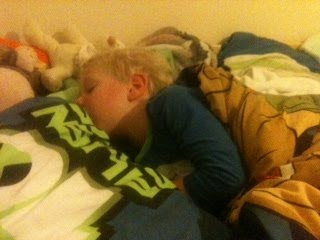 Sunday, lazy day, sat on the sofa fiddling with party bag gifts from the two (yes two) parties we'd been to the day before... when Elf starts screaming and rubbing his eyes. I have never heard him scream like that before; even with a sore croaky throat, it was blood curdling.

Gathered him up like a soft toy, no socks and in jim jams and rushed him into the car, remembering to turn off the pie in the oven! Drove at speed to the NHS drop in centre near us.

Rushed to fill in a form - Reason for visit - a glow stick split and the liquid sprayed into his eye.

Called over by a nurse, trying to explain what happened, still with the offending yellow glow stick in my hand, as if for forensic reasons I kept it...

By this time, Elf was calmer but still his eye was looking awful. We calmed down too.

Now began the hard bit. With accidents like these, a pH level needs to be taken of each eye with litmus paper to ascertain whether treatment is required.

OK so how do you get a bent piece of litmus paper into a 4 year old's eye? It worked the first time as he didn't know what to expect. The second time? He screamed the place down. And you know how strong a 4 year old can fight with all his might. People in the waiting room must have thought he was being tortured. We tried cajoling, bribing, forcing ... nothing worked. He would not allow the poor nurse to do the bad eye.

Reinforcements were called in. Another nurse. Restraint was suggested, never used nowadays, but necessary in times like this. He was swaddled like a baby in a blanket and I laid on his legs, his dad on his chest and they forced the litmus paper into his eye. He screamed and fought. Obviously.

Unfortunately the litmus paper showed a pH imbalance, so eye irrigation was needed. A drip of saline solution was held up by one nurse and we restrained him again while his eye was bathed out. At one point he relaxed and we thought he'd fitted. But I think he'd just exhausted himself. Then it was time for another litmus paper test. With more restraint.

Thankkfully it matched the good eye. All yucky substance gone (hydrogen peroxide and glass, we later found out from Google). A traditional eye examination was passed, amusingly with Elf making letter sounds (like kss for X and uh for U etc). Then came yellow dye to see if there were any abrasions. Which there were not. Thankfully.

This took an hour and a quarter. I cannot describe how it felt to restrain my child. My little baby. Against his will. His strong will. He kicked the nurse in the stomach. His face was blotchy from crying. Red from where the nurses had held him still. The nurses were so patient and kind to him. And to us.