A mummy's work is never done 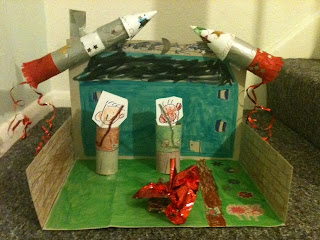 My Elf's project this half-term was on the subject of Fire. He I decided, no he did actually, to do his friend Mungle's garden, for that is where we had the Beer'n'Bombs party, otherwise known as a bonfire party. (It started at 5pm, a meeting of all the old nursery gang, and all the parents were pissed by 8pm. Or was that just me? No I wasn't the only one.)
So there is Mungle's house, with his garden complete with path and flowers, and garden walls. That's how the project remained for a month until today, the day before deadline day.
Then the panic started. It reminded me of writing essays at uni, starting at midnight on someone else's computer (this was 1996) and then almost crying at 5am because my essay wouldn't print. Then asking what time the computer centres opened, phew 7am. Anyway I digress.
The picture doesn't do the toilet roll-people justice - they are Elf and Mungle replete with sparklers and toilet roll clothes. Mr Humdrum was responsible for the rockets, and I have to say they steal the show.
I admit, it's hard to strike the balance between "Elf did it" and "My mummy did it"!
Has anyone else had any fun making things recently for their children? I'd love to know!