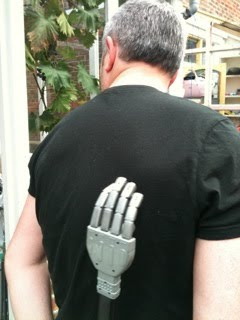 This is a bit of a cheat really. I was at a BBQ for M&S today (Mr Marks and Mr Spencer they are not). M, pictured here, was using my son's grabber and the picture just looked funny to me. I don't want to laugh at missing limbs because it is not funny (I think I am allowed though, my grandad had both his legs off and we used to call him Grumpy Stumpy).
I digress - the point is this. I wanted to post a picture of M&S's next door neighbour's 4 year old boy who kept peaking over the wall to entertain us. He put on his sister's red High School Musical dress, on top of his own High School Musical jock outfit, and then proceeded to sing one of the songs from it. It was hilarious. I did take a picture of him but resisted posting after being chastised by Mr Humdrum. It was wrong to even think about it, yes I see. Good job I was sober eh?